No Result
View All Result

UK: Anyone who tests positive for Covid-19 may get this amount of money under govt plans

Apple has agreed to settle a long-running class-action case in the US over allegations it deliberately slowed down older iPhones.

The proposed settlement, which still has to be approved by judge Edward Davila, could cost Apple up to $500m.

That could be just $25 (£20) for each affected user, depending on how many claims are made.

Apple has denied any wrongdoing in the case but settled in part because of the cost of continuing litigation.

The case dates back to December 2017, when Apple confirmed a long-held suspicion among phone owners by admitting it had deliberately slowed down some iPhones as they got older.

As batteries aged, their performance decreased and the “slowdown” lengthened the phones’ lifespan, it said.

But critics took it as proof of “planned obsolescence” – when manufacturers deliberately impair older products to prompt users to buy a new model.

The uproar prompted Apple to offer a cut-price battery replacement, which fixed the problem.

But it resulted in this US legal action and investigations by several European countries.

What does the class action say?

After nearly two years of litigation, papers filed in recent days ask the US district court in Northern California to rubber-stamp the settlement.

But that $25 could go up or down, depending on whether there is cash left over in the minimum payout – or not quite enough in the maximum – once all the claims are made.

Meanwhile, the “named plaintiffs” – those people who put their names down on the class action on behalf of all iPhone owners – will receive $1,500.

And those who gave evidence in the case will receive $3,500.

In addition, the lawyers will ask the court to grant them $93m in “reasonable attorneys’ fees” and another $1.5m in expenses. 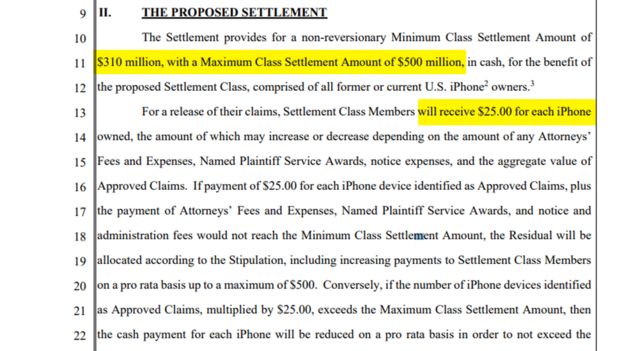 It comes weeks after Apple was fined €25m (£21m) in France for slowing down phones.

The French regulator said customers did not know new updates to the phones’ software would slow them down – something French officials decided was a “deceptive commercial practice”.

UK: Anyone who tests positive for Covid-19 may get this amount of money under govt plans

RE:JOHN MAHAMA NEGLECTED ASHANTI REGION WHEN HE WAS PRESIDENT

Dr Adutwum gets appointment at University of Califonia

Economy is bouncing back after Covid-19- Bawumia

Tweets by tvnewsgh
No Result
View All Result